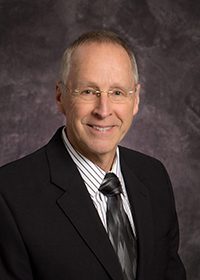 Mark Miller co-founded Advantage Trust Company in 1997 together with his wife Julie.  For the 24 years prior thereto he was with the trust department of the former Planters State Bank, then Bank IV, then Boatmen’s, and then Bank of America, all by way of successive bank mergers.  During that time he rose to become head of the trust department and executive vice president of the commercial bank here in Salina.  He then began his career with Advantage Trust Company as its President and CEO.  In 2014, after another 17 years of providing outstanding trust and investment services to our clients through Advantage Trust Company, he began his current “mostly retired” status, remaining “of counsel” and Chairman of the Board.